The study took place in the south west of Ethiopia, in the Dawro area. This region has a very specific landscape with high mountains and huge plateaus.

The study took place in Dawro midlands. In this region, the water comes from high sources and go to the valley within rivers and torrents. People used to go to the river to collect water. Nevertheless, this water can be polluted during its course from sources to the place where it is collected. Moreover, the water is quite abundant in rainy season but becomes very rare during the dry season.

The French NGO Interaide is acting in this woreda to provide a secured access to good water. They help people, gathered in users associations, to build a common water point. This solution is well adapted to the complex relief of this regions.

The action of InterAide aims to be sustainable: once the water point built, the community is responsible for its maintenance

Like in other countries, the method was to interview people who benefit from the service and people who do not.  Villages in midlands where InterAide built water point for more than 4 years to see a middle term impact were chosen as our “connected” sample. And we identified some places around where people don’t have access to InterAide water supply.

The aim was to interview 4.4% of households beneficiating of water point for more than 4 years and living in midlands. Due to logistic reasons, we interviewed only 3.4% of this population.

You can see below an average Dawro midlands dweller’s portrait:

People who don’t have access to InterAide water point seem to be a little bit wealthier than the others.

It is noteworthy that the income of household income is only an estimation: price was put on farmers’ production but most of this production is in reality used for his own consumption. It is only an indicator to get an idea of household wealth.

A change in water supply habits:

Interaide’s work changed deeply people habits. People who have access to InterAide water point use only the water point for drinking purpose. It is important to highlight it because it shows that people use the solution and so that it is well adapted to their way of living. 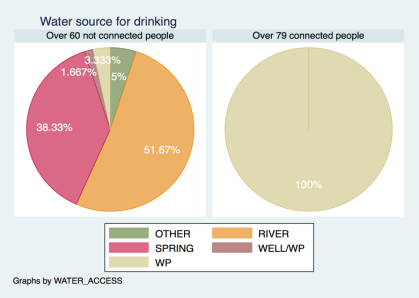 Comparison of water source for drinking

• Around 50% of households use InterAide water point for washing body and washing clothes.

• For cattle watering, 70% of the households who have cattle use the water point for their cattle. In fact, leeches are present in the river water and are an important cause of death. InterAide water point helps to solve this problem, bringing water free of leeches.

According to people, they spend less time to collect water. The collect is 1.5 times longer when they do not have access to an InterAide water point. The time saved is even more important during dry season when rivers are dry.

The action of InterAide clearly improves people health conditions. Decrease of water diseases, decrease of health expenditures, decrease of the percentage of people facing health problem can be observed.

According to the WHO, every year, 1.8 million of people die because of diarrheic disease, 90% are children under 5. So, this population is clearly one of the most vulnerable. Focusing only on children under 5 years old, typhoid and stomach-ache are totally eliminated, diarrheal and malaria know a big decrease.

Not having access to a drinking water source and being sick because of it does not only mean that you feel uncomfortable during a while, it also brings some unexpected expenses. For households with a drinkable water point, average expenditure linked with water disease has been divided by more than 2.5, they passed from 342 Birr (12 €) over a period of 3 months to an average of 130 Birr (4 €) over a period of 3 months.

A good impact on the global health of the community having access to drinking water can be expected. In fact, having access to a water point can increase consumption and by the way improve the hygiene, provides more water to wash the house, the clothes, but also, people can participate to awareness session with the NGO. All these changes could improve the global health level in households

But in the result, we observe the opposite, people who benefit from InterAide water point spend almost twice more money in drugs to heal non hydric diseases than people who do not benefit from it.

Finding such a result does not have any sense, we can make the supposition that we are here facing some limits of studies based on stakeholder’s speeches.  An other explanation could be that main diseases are linked with water

To know if there is any threshold effect with incomes on health, data about household incomes and health were combined.

Population was divided in 3 categories:

Contrary to other countries, the study shows that having access to a drinking water source (InterAide service) makes the biggest difference for not poor people (66% of the not poor households are sick without InterAide water point, when 19% are sick with the system).

We can interpret these results saying that, there is a threshold on wealth. There is a poverty circle which makes changing drinking water access be a great project but the full impact can not be seen without other changes. It is noteworthy that those results are different from other countries.

The impact on intimacy and hygiene is quite interesting.The results show that women don’t change their habits if they have access to InterAide water point

Impact on the community

Some impacts can be also measured concerning the global situation in the community with a decrease of tensions linked with water among community which have access to InterAide supply: 32% of the households declared facing tensions linked with water on the not connected side whereas only 19% of the households declared the same thing on the connected side.

Moreover, a significant difference of average time spent in society could be observed: Social time pass from 67 minutes per day to 82 minutes for people having InterAide water point. So even if such effects are very difficult to quantify in term of economic impact, we can easily imagine, that it improves a lot the household life conditions and it permits a better community life, which is not negligible.

During a focus group discussion in Aela Bacho, a group of about twenty women, told us about a perverse dynamic that set up and reversed the water point positive impact.

In fact, they told that InterAide water point brought great changes in their life at the beginning, they were less sick, their cattle were prevented from leech issue, they could plant some little vegetable in their gardens, they saved some time and they didn’t have to furnish an important physical effort to have water. But after a while, this water point close to the road became very attractive, a new school opened and quickly the population increased.

Today it is a real problem with water, because the quantity available is not sufficient, so on one side, people go back to their former sources, and so drink dirty water with all consequences it could have and on the other side, they still try to collect some water at the water point and so they loose lot of time waiting for their turn, there are regular fights because of the line, and some women underline that they do not recognise themselves, because such situation makes every one forget about their tradition and they don’t even offer their place in line to elders.

This story is an anecdote not the common situation for InterAide water points, but we saw here the sizing issues.

Good news: our local contacts said us that the problem is now solved. The user association pay for building a tank which assures a more confortable access to water.

InterAide built a sustainable system for water access in the Dwaro. This system is well adapted to the people (in fact, they use it) and moreover it is adapted to the land : it is unthinkable to build a big water network in this region.

Sometimes, the successful story of InterAide water point backfires with an increasing pressure on the water source which can’t absorb all the demand and that is the beginning of some disagreements. But the social system linked to those water points is able to solve it. Moreover, more globally, a decrease of social tensions can be observed at medium term! So, bringing water to people also helps to improve community life.